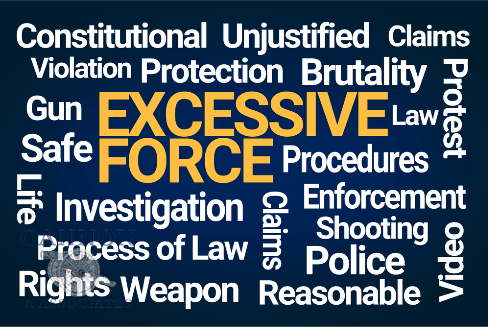 CAN I SUE POLICE FOR EXCESSIVE FORCE?

Every year hundreds of people are killed by police and many more are subjected to excessive
force by police or police brutality. Fortunately, the law allows for individuals that were the
victim of excessive force to sue police officers and their departments to seek redress for the harm done by police acting with excessive force. Police can be sued in state and federal court for excessive force claims. State courts have concurrent jurisdiction over federal law and you have the ability to sue in state court, unless there is an any with exclusive jurisdiction in federal court.

How can you sue Police in an Excessive Force Case?

Excessive force, at its most basic level, is a type of tort or a “civil wrong” that caused an injury to the plaintiff, victim of excessive force. Many tort claims against police involve the civil claims of Assault and Battery, Negligence, Failure to Train, and Failure to Properly Supervise.

What is the legal authority for Excessive Force Lawsuits?

The use of excessive force, under Section 1983, constitutes a claim for a civil lawsuit as a
violation of the Fourth Amendment protection of not being subjected to “unreasonable seizures.”

Police Use of Force

Police may use more force to conduct an arrest against a suspect that is resisting than a compliant suspect. Additionally, police may use deadly force to respond to the threat of great bodily harm or death to themselves, fellow officers, or civilians. The amount of force that an officer should use in responding to a fleeing suspect is dependent upon the alleged crime that suspect has committed and whether the suspect is believed to have a weapon or not.

Where does Excessive Force happen?

Law enforcement officers are training to handle intense situations and violence is unfortunately
an aspect of police work. However, police cannot use more force than is reasonably necessary to
respond to a given situation. Excessive force can involve the use of punching, kicking, a police
baton, police Taser, pepper spray, and even a firearm.

Who decides is Force is Excessive Force?

Can a guilty suspect win an excessive force lawsuit?

Yes, the plaintiff’s guilt or innocence of the crime that led the officer to arresting him is not a valid defense for the police officer. However, a plaintiff’s excessive force claim is generally strengthened by proving factual innocence for the suspected crime.

Are Police immune from being sued?

In some instances, yes; police can be immune from being sued for use of force. Oklahoma law
and the Eleventh Amendment to the Constitution provide qualified immunity for public
employees performing their official duties or acting in their official capacity. However, the use of excessive force is not protected under qualified immunity. Police conduct that is beyond
appropriate or reasonable use of force can subject officers, their departments, and government
entities or municipalities to civil liability for the torts of excessive force, assault and battery, negligence, failure to supervise, and other civil wrongs.

Burden of Proof in Excessive Force Case
The plaintiff has the burden in an excessive force case against police, just like the plaintiff has the burden in most civil lawsuits. The plaintiff in an excessive force lawsuit against the police, must show that the office or officers went beyond reasonable force in the performance of their duties. The law presumes and allows for a certain amount of force; however, the force must be justified based on the circumstances at hand. If a plaintiff was serious injured or killed by police and police did not use justifiable force; the plaintiff should recover for excessive force, either at trial or in a settlement agreement.

1. Officers must be given Qualified Immunity to do their job

Police have a difficult job and must make split second decisions; however, the wrong decision
can have serious consequences for the public and officers must be held accountable for their
actions. The defense typically goes courts should not hold officers “personally liable for a bad
decision”, because it will deter officers from performing their duty.

There is some validity to this statement; however, current case law and the status of qualified
immunity provides ample protection to law enforcement officers. The “in the moment” decisions
of law enforcement officers are highly deferential and evaluations are made looking through the
lens of an officer in the moment of the decision. The Supreme Court in Graham v. Connor set
the “objective reasonableness” standard for excessive force lawsuits, which prohibit courts from
judging officer decisions in a vacuum after the fact. The Court held the following:

The “reasonableness” of a particular use of force must be judged from the
perspective of a reasonable officer on the scene, rather than with the 20/20 vision
of hindsight. See Terry v. Ohio, supra, at 20-22. The Fourth Amendment is not
violated by an arrest based on probable cause, even though the wrong person is
arrested, Hill v. California, 401 U.S. 797 (1971), nor by the mistaken execution of
a valid search warrant on the wrong premises, Maryland v. Garrison, 480 U.S. 79
(1987). With respect to a claim of excessive force, the same standard of
reasonableness at the moment applies: “Not every push or shove, even if it may
later seem unnecessary in the peace of a judge’s chambers,” Johnson v. Glick,
481 F.2d, at 1033, violates the Fourth Amendment. The calculus of
reasonableness must embody [490 U.S. 386, 397] allowance for the fact that
police officers are often forced to make split-second judgments – in
circumstances that are tense, uncertain, and rapidly evolving – about the
amount of force that is necessary in a particular situation.

As in other Fourth Amendment contexts, however, the “reasonableness” inquiry in an excessive force case is an objective one: the question is whether the
officers’ actions are “objectively reasonable” in light of the facts and
circumstances confronting them, without regard to their underlying intent or
motivation.

The Court’s opinion in Graham v. Connor did not specifically address qualified immunity, rather the Court was explaining that an officer has not violated a suspect’s Fourth Amendment rights, unless the officer’s actions were “objectively unreasonable” under the circumstances know to the officer at that time.

Qualified Immunity is only relevant to protect officers from civil rights violations against
plaintiffs that were “not clearly established” prior to the violation, i.e. no prior cases address the particular instance of excessive force in question. Police officers only need qualified immunity to protect them from Constitutional violations. Therefore, qualified immunity is not necessary to ensure police are able to make quick decisions, as that ability is in place in the Fourth

Amendment and thousands of judicial decisions.
The “clearly established law” prong is unfortunately based on a legal fiction, that officers are
familiar with and acting upon all established precedent in the area of excessive force. The
standard operates to insulate officers from misconduct, unless a judicial decision has previously determined the specific act of excessive force or police misconduct at question has been held unconstitutional.

Federal Judge James O. Browning of the Federal District Court of New Mexico, issued a harsh
criticism of the judge made doctrine of qualified immunity, in Manzanares v. Roosevelt County Adult Detention Center, D.N.M., CIV-16-765 JB/KRS (D.N.M. 2018). The following is a portion of his opinion:

[T]he Supreme Court has sent unwritten signals to the lower courts that a
factually identical or a highly similar factual case is required for the law to be
clearly established. . .

Factually identical or highly similar factual cases are not, however, the way the real world works. Cases differ. . . . The Supreme Court’s obsession with the
clearly established prong assumes that officers are routinely reading Supreme
Court and Tenth Circuit opinions in their spare time, carefully comparing the
facts in these qualified immunity cases with the circumstances they confront in
their day-to-day police work. It is hard enough for the federal judiciary to embark
on such an exercise, let alone likely that police officers are endeavoring to parse
opinions. . . . It strains credulity to believe that a reasonable officer, as he is
approaching a suspect to arrest, is thinking to himself: “Are the facts here
anything like the facts in York v. City of Las Cruces?” . . .

The Court disagrees with the Supreme Court’s approach. The most conservative,
principled decision is to minimize the expansion of the judicially created clearly
established prong, so that it does not eclipse the congressionally enacted § 1983
remedy. As the Cato Institute noted in a recent amicus brief, “qualified immunity
has increasingly diverged from the statutory and historical framework on which it
is supposed to be based.” Pauly v. White, No. 17-1078 Brief of the Cato Institute
as Amicus Curiae Supporting Petitioners at 2, (U.S. Supreme Court, filed Mar. 2,
2018)()(“Cato Brief”). “The text of 42 U.S.C. § 1983 . . . makes no mention of
immunity, and the common law of 1871 did not include any across-the-board
defense for all public officials.” Cato Brief at 2. “With limited exceptions, the
baseline assumption at the founding and throughout the nineteenth century
was that public officials were strictly liable for unconstitutional misconduct.
Judges and scholars alike have thus increasingly arrived at the conclusion that
the contemporary doctrine of qualified immunity is unmoored from any lawful
justification.” Cato Brief at 2. See generally William Baude, Is Qualified
Immunity Unlawful?, 106 Cal. L. Rev. 45 (2018)(arguing that the Supreme
Court’s justifications for qualified immunity are incorrect).

Moreover, in a day when police shootings and excessive force cases are in the news, there should be a remedy when there is a constitutional violation, and
jury trials are the most democratic expression of what police action is
reasonable and what action is excessive. If the citizens of New Mexico decide
that state actors used excessive force or were deliberately indifferent, the verdict
should stand, not be set aside because the parties could not find an
indistinguishable Tenth Circuit or Supreme Court decision. . . .

3. Officers do not have absolute immunity

This theory assumes that without immunity the civil legal system would not work in application
to law enforcement officers and their conduct. Private parties and companies engage in lawsuits
everyday across the county and the vast majority of those cases are resolved by agreement /
settlement between the parties or by a jury at trial. The unfortunate thing about some amount of
immunity is that the individual judge that evaluates the law as applied to the facts of a specific excessive force case is assumed to make the right decision and not grant immunity, when
inappropriate. The problem with this occurs when judges use their own bias or judgment to
decide that in the specific scenario the use of force by the office was justified, as opposed to
what our legal system assumes is the greatest tool; the jury system.

If you or a loved one has been the victim of excessive force, our Fierce Advocates can help you
seek justice and compensation for the harm done at the hands of law enforcement.