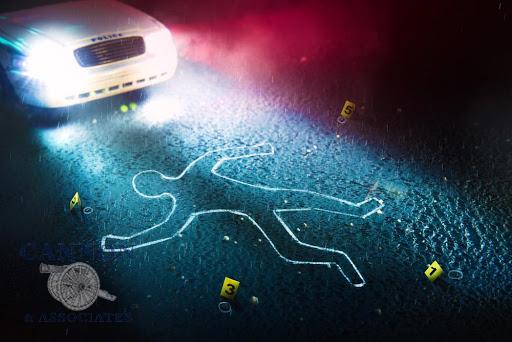 Oklahoma Murder Criminal Defense Attorneys Cannon & Associates are FIERCE ADVOCATES for those charged with life-changing criminal offenses–Oklahoma County Murder Defense Lawyers. We have successfully defending multiple clients in jury trial and throughout the process of a Murder or Manslaughter case in Oklahoma.

We are led by John P. Cannon, a former Assistant District Attorney who prosecuted violent crime as a DA before becoming the experienced Edmond criminal defense attorney he is today. A successful defense can result in a case dismissal, dropped charges, or a not-guilty verdict at trial, which we have accomplished for multiple clients charged with Murder in Oklahoma.

If you or a loved one has been charged with a homicide or Murder, call us for a free confidential case evaluation. Edmond Murder Criminal Defense Attorney John Cannon is a FIERCE ADVOCATE and available to talk to you today. Call Cannon & Associates at (405) 657-2323 and begin to prepare your defense.

Charged with Murder in Oklahoma

When charged with murder in Oklahoma, the outcome of your case will have a dramatic impact on the rest of your life and your family. Homicide charges, including murder are the most serious types of crimes as the impact of the harm caused and the severity of the resulting penalties cannot be any greater. A person charged with murder in Oklahoma County or anywhere in Oklahoma faces the stiffest penalties for murder in the country: life in prison or life without the possibility of parole. In some circumstances with aggravating factors, the prosecution may seek the death penalty in Oklahoma

Even without a single instance of contact with police prior to the case, aggravating factors may cause a person convicted of Murder to never be released from prison. A simple life sentence is currently calculated as 45 calendar years in prison.

Murder cases, especially involving the potential of the death penalty, require special skills and knowledge based on experience handling complex and life-altering murder cases. Attorney John Cannon has many years-experience practicing criminal defense and prosecution of violent crime in Oklahoma, including many murder and manslaughter cases. Cannon & Associates works closely with investigators, mental health experts, forensic experts, toxicologists, firearm experts, and others to build a strong defense and provide FIERCE ADVOCACY for our clients facing of murder in Oklahoma.

Unlawfully causing the death of another human being with malice aforethought. Period. However, the legal significance of this sentence is greatly debated.

Malice is that deliberate intention unlawfully to take away the life of a human being, which is manifested by external circumstances capable of proof.

Murder in the First Degree by Felony Murder does not require malice aforethought. Rather, felony murder in Oklahoma means engaging in one of the following specified felonies and your personal conduct causes death of a human being. In Oklahoma, you may be convicted of Felony Murder for the acts of an accomplice resulting in the death of another; however, the death penalty may not be sought in that circumstance. The following felonies comprise the lists of predicates to felony murder:

The following constitutes Second Degree Murder in Oklahoma: an act imminently dangerous to another person and evincing a “depraved mind”, regardless of human life, although without any premeditated design to affect the death of any particular individual; or

Second Degree Felony Murder, which is the death of a human being during the commission of any felony other than those that constitute Felony Murder (listed above).

Facing a murder or homicide investigation or charge is an intimidating endeavor.  Police and prosecutors appear to have all the power and evidence. However, through experience and Fierce Advocacy you can fight these charges and potentially reach a positive outcome or a substantially reduced sentence.

To fight and win homicide and murder cases, an experienced Oklahoma murder defense lawyer from Cannon & Associates will typically take the following steps:

These steps can help you fight homicide charges. Cannon & Associates’ success defending people accused of homicide crimes is based on our comprehensive approach. 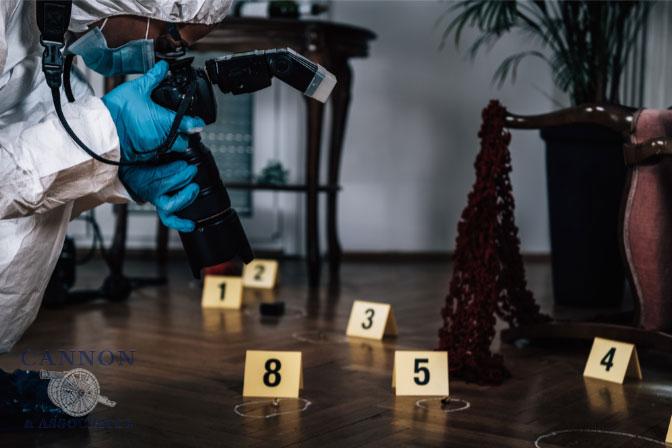 If an individual has been charged with first degree murder in Oklahoma County, Cannon & Associates will examine every report available, the forensic evidence, ballistics, blood-splatter evidence, eyewitness statements, police interviews, crime scene investigation reports, the autopsy, and all other available information to identify the best defense in your case.

Our team at Cannon & Associates will analyze the entire body of evidence in the case, determine the best potential murder defense strategies, and explain all of this to our client’s and their family to make a recommendation for the best option in defending your Murder or Manslaughter case. Some of the strategies we use include challenges to DNA evidence, presenting alternate theories of the case, defendant’s version of the evidence, identifying weaknesses in forensics or witness accounts, coerced confessions, and suppressing illegally obtained evidence.

Through FIERCE ADVOCACY we seek to exonerate our clients with an agreed dismissal or obtain a NOT GUILTY verdict at trial; however, at the same time we will build your story, including mitigation to seek a settlement option to reduce your charges from first degree murder or reduce any murder charge to manslaughter. Through years of murder defense in Oklahoma, Mr. Cannon knows the stakes for a client and the family of a client facing murder charges in Oklahoma. Therefore, our Firm fights for clients every inch of the way from investigation through jury trial.

Mr. Cannon explores opportunities to defeat the prosecution’s case by seeking to exclude critical evidence, if it was obtained by an unreasonable search or seizure in violation of the Fourth Amendment or coerced confessions in violation of a client’s Fifth Amendment right against self-incrimination. These and other types of evidence may be critical to the prosecutor’s case. The exclusion of improper evidence can place significant pressure on the prosecution to reduce the seriousness of murder or manslaughter charge in your case. Evidence obtained during the investigation of your Oklahoma murder case may be illegal for a number of reasons. 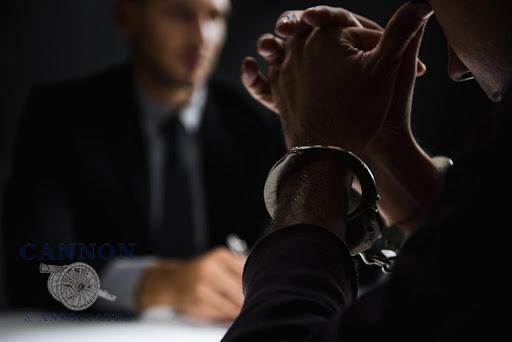 Defenses to Murder Charges in Oklahoma

There are a number of valid legal defenses that will prevent a conviction for murder or result in a reduced charge. Cannon & Associates’ approach to defending murder cases relies in part on examining, arguing and proving all valid defenses pertinent to the case.

1) You are wrongfully accused;

2) You committed the act; however, it was justified or mitigated below existing charge.

Examples of legal defenses to murder charges include:

To learn about these and other possible defenses to murder charges, call the Edmond murder defense attorney for a free confidential case evaluation today at (405) 657-2323.

Prosecutors cannot use evidence that was obtained by illegal means. When law enforcement violates the law or your rights, your murder defense attorney may be able to suppress evidence that they collect. Any motion that your defense attorney files and wins will bolster your defense and weaken the prosecutions.  Some defense motions, if successful will result in your murder case being dismissed. The most common defense motions in murder cases include:

Are Innocent People every charged with Murder?

Innocent people are accused of crimes every day in Oklahoma; murder charges are no exception. Innocent citizens being charged with murder is even more common than other criminal charges, because there are rarely eyewitnesses to a murder and a prosecutor’s case is largely based on circumstantial evidence or evidence surrounding the event. Unfortunately, this results in innocent people in the wrong place or time being accused and charged with murder in Oklahoma. Fighting to win at trial is the best and sometimes only option, if you are innocent. We are dedicated to FIERCE ADVOCACY and winning at trial, which can include the following:

Attacking the Prosecution’s Case — The prosecutor has the burden in a criminal trial and holding them to that burden is one of the most effective defenses.  Beyond a Reasonable Doubt is the highest burden in the United States justice system and our firm holds the government to that burden in every case.

Presenting Defense Story — The jury must consider all information presented by you and telling a compelling story is a very powerful way to fight your murder trial.  Our Firm accomplishes this goal by early and detailed attention to building your story through investigation and identifying witnesses to support your defense.  We retain a murder investigator in every murder case to help our firm understand what happened and examine the evidence; long before a jury is very called in your murder trial.

Experienced Murder Defense Lawyer — Your number one priority in fighting your murder case, if you want to win at trial is hiring a skilled and successful murder defense attorney that has won murder cases. 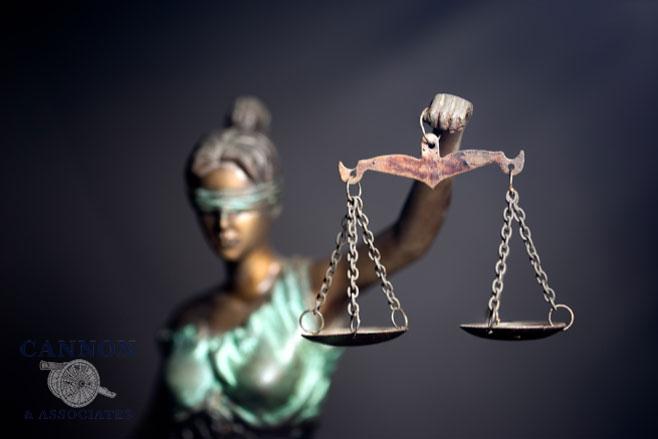 You should immediately exercise your right to an Oklahoma criminal defense attorney, if you have been arrested or are being investigated for murder or manslaughter in Oklahoma! Facing murder charges in Oklahoma will have life changing effects on your freedom and future. Our team at Cannon & Associates understands these concerns as we have walked along side many clients that have successfully defeated murder charges in Oklahoma, including obtaining a not guilty verdict at trial.

Cannon & Associates will do everything possible to exclude damaging statements and evidence from your Oklahoma County murder case through aggressive investigation and years of experience with the laws surrounding suppression and exclusion of evidence.

Experience matters when you are facing Murder Charges in Oklahoma County and beyond. It is important to know the Oklahoma murder defense lawyer you hire is dedicated to your cause and versed in all aspects of the law concerning murder and suppression of evidence in Oklahoma. John Cannon, owner of Cannon & Associates is a former prosecutor and very experienced in the law and issues associated with murder charges in Oklahoma. He has been recognized as a Super Lawyer and Top 40 under 40 in criminal defense. Contact Cannon & Associates to protect your rights and Fight your case. Complete the CONTACT FORM ON THIS PAGE NOW or CALL at 1(405) 657-2323 for a free confidential case evaluation.