John Cannon helped me through a very difficult time. Through the whole process he was professional and kind. Hemade me feel at ease and explained things every step of the way. I would recommend John for anybody needing a good attorney that will treat you like a friend. – Bobby Jackson

What is a Federal Grand Jury?

The Federal Criminal Defense Attorneys at Cannon & Associates are FIERCE ADVOCATES for those charged with any and all federal crimes. We have successfully defending many clients in federal court across Oklahoma.

We are led by John P. Cannon, a former Assistant District Attorney and Assistant Attorney General who prosecuted crimes in state court before becoming the experienced Edmond criminal defense attorney he is today. A successful defense can result in a case dismissal, reduced charges, or a not-guilty verdict at your federal criminal trial.

If you or a loved one have been indicted or are under federal investigation for a federal crime in Oklahoma, call us for a free confidential case evaluation. The Edmond Federal Crimes Defense Attorneys at Cannon & Associates are FIERCE ADVOCATES and available to talk to you today. Call Cannon & Associates at (405) 657-2323 and prepare your defense. 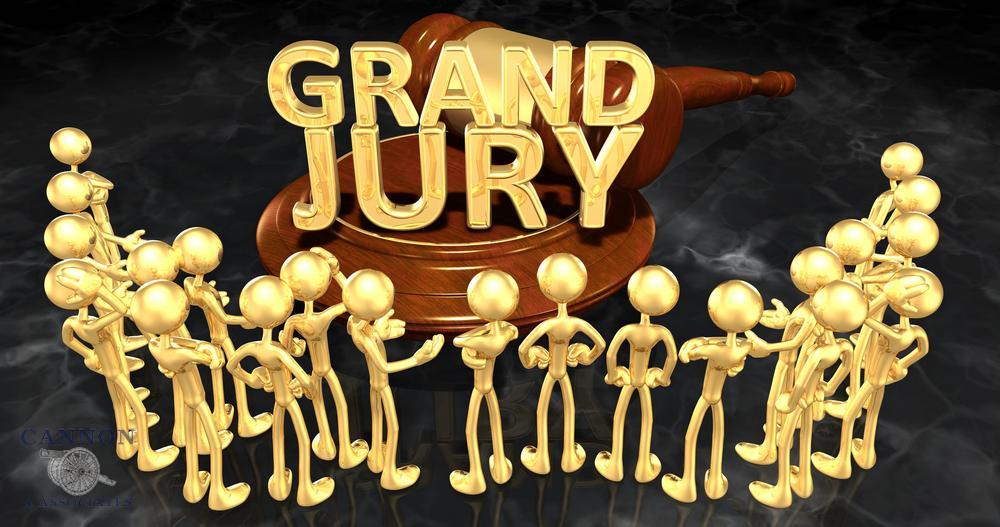 Prior to explaining federal grand juries and the federal criminal process, it is instructive to have a brief overview of how felonies proceed in Oklahoma state court.

Felonies in Oklahoma are tried at the State District Court level. Before a case is tried in a District Court, the prosecution must file a felony information in state court based upon probable cause evidence, which is a much lower burden than beyond a reasonable doubt; necessary for a conviction or guilty verdict at jury trial in Oklahoma.

The Fifth Amendment to the U.S. Constitution provides an independent grand jury must be formed and after hearing evidence, the grand jury must return an indictment before a defendant can be forced to stand trial in federal criminal court. However, in Oklahoma state court in lieu of a grand jury a judge must determine probable cause evidence exists at a “preliminary hearing” prior to a state court criminal defendant being forced to stand trial. In Oklahoma, witnesses are called and testimony is offered during the preliminary hearing, if probable cause is found the case is bound over for trial to the District Court and a criminal jury trial will likely follow.

The Oklahoma Multicounty Grand Jury Act, Oklahoma Statutes Title 22, Section 35o et seq. states the authority and procedure for Oklahoma grand juries. In certain state cases, a county grand jury or the multi-county grand jury is convened and asked to determine, if enough evidence exists to return an indictment or formal charges. In Oklahoma, a grand jury is made up of twelve (12) members, chosen at random by driver’s license registration, and operate in secret during deliberation. In state court, grand juries are typically called by a District Judge or by a signed petition of 500 to 5,000 petitioners. Only nine (9) of the multicounty participants have to agree an indictment should be returned. Interestingly, the grand jury can request evidence and has broad investigative authority.

A special prosecutor, appointed by the District Court, presents evidence and questions witnesses before grand jury, much like in trial. However, the rules of evidence are not enforced and the grand jury can make inquiries, question witnesses, and may request additional witnesses. There is no time limit to how long a grand jury has to consider the evidence.

Grand juries meet to determine whether a crime was committed, not whether a suspect is innocent or guilty. This is the most important difference between a jury trial and grand jury.

The Fifth Amendment to the United States Constitution provides “No person shall be held to answer for a capital, or otherwise infamous crime, unless on a presentment or indictment of a Grand Jury, except in cases arising in the land or naval forces, or in the Militia, when in actual service in time of War or public danger…”

Federal misdemeanor charges, i.e. possession of marijuana in a national park, are not presented to a grand jury. They are charged by a U.S. attorney filing an information. This process is similar to the Article 32 hearing process in military justice for our Armed Forces.

The secrecy of federal grand juries was upheld in the 1979 United States Supreme Court decision in Douglas Oil Co. of Cal. v. Petrol Stops Northwest, 441 US 211 (1979). Prior to Douglas Oil the United States Supreme Court decided United States v. Procter & Gamble Co., 356 US 677 (1958), which allowed disclosure of grand jury transcripts with restrictions: great prejudiced or resulting injustice. However, witnesses testifying before a grand jury can typically discuss their testimony as an exercise of their First Amendment rights.

As stated above relating to Oklahoma state grand juries, a federal grand has the authority to compel testimony. However, the suspect before a federal grand jury investigation has no right to testify or present a defense. The U.S. Attorney’s Manual forecasts the potential for investigatory targets to testify.

The U.S. Attorneys’ Manual states prosecutors “must recognize that the grand jury is an independent body, whose functions include not only the investigation of crime and the initiation of criminal prosecution but also the protection of the citizenry from unfounded criminal charges” and targets of investigations have the right to, and can, “request or demand the opportunity to tell the grand jury their side of the story.”

United States law allows for the formation of special grand juries, which are called to investigate organized crime in a community, including organized drug activity or organized government corruption. Although not applicable yet in Oklahoma’s three Federal Districts, 18 U.S.C. § 3331(a), dictates the U.S. District Court in a having more than four million inhabitants must impanel a special grand jury when requested by the Justice Department.

At Cannon & Associates, we provide experienced federal criminal defense for those accused of state and federal crimes in Edmond, Oklahoma City, and beyond in Oklahoma. We understand the federal grand jury process and how to prepare a defense in federal court proceedings.

We offer free confidential case evaluations and can advise you on the steps of federal prosecution in Oklahoma, if you are under investigation by a grand jury or have been indicted in Oklahoma federal criminal court.

Experience matters when you are facing federal indictment in Oklahoma or the potential loss of your freedom. It is important to know the Oklahoma federal criminal defense lawyer you hire is dedicated to your cause and versed in all aspects of federal criminal defense and federal sentencing guidelines. John Cannon, owner of Cannon & Associates is a former prosecutor and very experienced in the law and issues associated with fighting federal criminal charges and criminal jury trial. He has been recognized as a Super Lawyer and Top 40 under 40 in criminal defense. Contact Cannon & Associates to protect your rights and Fight your case. Complete the CONTACT FORM ON THIS PAGE NOW or CALL at 405-657-2323 for a free confidential case evaluation.