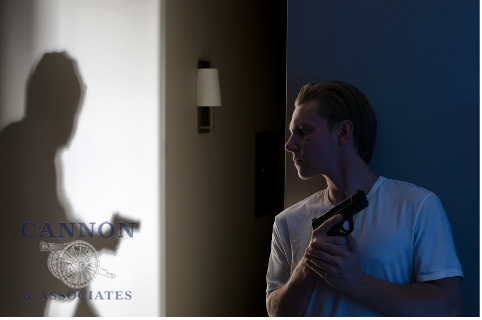 The justified use of deadly force, self-defense, is a widely claimed, but less frequently adopted affirmative defense. Unfortunately, people that have used deadly force and taken another
person’s life believe that the force they used was justified to defend themselves or others; only to find law enforcement investigates and presents murder or homicide charges to the prosecutor.

Law enforcement gives limited consideration to self-defense during a homicide investigation.
This analysis is left to the prosecutor or district attorney to decide whether or not the homicide was justified by self-defense or defense of another. Obtaining an experienced self defense lawyer and criminal defense attorney is vital, if you or a loved one is facing investigation for any homicide, including the use of deadly force in self-defense.

What is justifiable Use of Deadly Force in Oklahoma?

The use of Physical or Deadly Force Against an Intruder is discussed in Oklahoma Statutes Title 21 section 1289.25 of the state criminal code. The Oklahoma legislature

“recognizes that the citizens of the State of Oklahoma have a right to expect absolute safety
within their own homes or places of business.”

Therefore, a person is presumed to have held a reasonable fear of imminent peril of death or
great bodily harm to himself or herself or another when using defensive force that is intended or likely to cause death or great bodily harm to another in two situations:

Do I Need to Prove an Intruder wanted to do violence?

No, Oklahoma The law further clarifies that a person who unlawfully and by force enters (or
attempts to enter) the home, residence, occupied vehicle, or a place of business is presumed to be doing so with the intent to commit an unlawful act involving force or violence. Simply stated, Oklahoma law presumes that any person that enters a home unlawfully by force does so with the intent to commit violence.

The presumption that an intruder enters a home, dwelling, or building with the intent to do harm
or violence does not apply in three circumstances:

When is Deadly Force Justified?

A defense to the use of deadly force exists when an intruder enters a residence or building
unlawfully by force exists, so long as the three above conditions do not apply. Additionally, if
prosecutors believe justifiable deadly force exists than deadly force is an affirmative defense and you should be insulated from criminal prosecution for a homicide.

Do I have a Duty to Retreat?

You do not have a duty to retreat, if you were lawfully in the place that you were attacked. A
person who is not engaged in an unlawful activity and who is attacked in any place where he or
she has a right to be has does not have a duty to retreat and has the right to stand his or
her ground and meet force with force, including deadly force, if he or she reasonably believes it is necessary to:

What is Castle Doctrine?

Oklahoma “Castle Doctrine” is a legal doctrine designates a person’s dwelling, residence,
occupied vehicle, and place of business as a place in which that person has special immunities,
which allows homeowners to use deadly force in certain circumstances.

In Oklahoma, a homeowner can use deadly force against an intruder when there is a reasonable
belief that there is a danger of great bodily harm or death.

Oklahoma has placed an important limitation on the Castle Doctrine in domestic abuse cases. A
person who seeks to use deadly force to fend off an intruder in a domestic abuse case must
attempt to retreat from the aggressor before responding with deadly force. This is mostly geared
towards spouses who live in the same dwelling, and technically have not met the requirement of
an intrusion

What is a Dwelling for Castle Doctrine?

What exactly is a dwelling? A dwelling is a building, including an attached porch, which has a
roof over it and is designed to be occupied by people. This includes temporary buildings, mobile
buildings and homes, and even tents. Most commonly, it includes a person’s “residence,” or
place where a person resides or visits as an invited guest.

What is Make My Day Doctrine?

The “Make My Day” doctrine was an attempt by Oklahoma courts to expand self-defense
protections of the Castle Doctrine to not just the homeowners, but those who legally live in the
dwelling. The Make My Day doctrine allows other occupants to use deadly force against
intruders into a dwelling that they do not own. The common example in this case is a babysitter,
who is not a homeowner but needs to invoke the doctrine to protect herself and the children in
her care while the homeowners are away.

Although these self-defense protections have now been extended to other persons that do not
reside in the home, the Make My Day doctrine still requires that the person using deadly force to have held a reasonable fear of imminent peril of death or great bodily harm to himself or another when using such defensive force.

What is Stand Your Ground Doctrine?

“Stand Your Ground” expanded upon the Make My Day doctrine of self-defense protections
beyond the confines of a building where they are legally allowed to be. Stand Your Ground laws
say that a person has no duty to retreat if confronted by someone engaged in criminal activity,
and that they can protect themselves with lethal force if they believe that their own lives are in jeopardy. This means that there is no geographic limitation on where this protection of self-
defense applies.

While the Make My Day doctrine requires the person to legally occupy the building before being
allowed deadly force, the Stand Your Ground doctrine allows a person who is legally present at
any location of a confrontation to use deadly force, provided that they have a reasonable fear of imminent peril of death or great bodily harm to himself or another when using such defensive
force. The exception to this doctrine logically applies to the person committing a crime: if a
crime is underway, the person committing it cannot use deadly force to protect themselves
against someone who is trying to stop them.

Can I shoot someone who breaks into my house?

Whether or not you can shoot someone that breaks into your home depends on the
circumstances. Oklahoma law protects the sanctity of a person’s home. As stated above,
Oklahoma law presumes absolute sanctity in your home and you may defend yourself within
your home. However, justifiable use of deadly force is not an absolute protection. You do not
have the legal right to shoot and kill any person that enters your home; however, if the entry was unlawful and by force, then the law presumes that violence will be threatened by that intruder and you may use lethal force to protect yourself.

Who decides if I acted in Self Defense?

There are three phases at which someone will consider whether or not your use of deadly force
was criminal, i.e. a homicide, such as manslaughter or murder. Each of these phases includes a
different type of review and different arguments that should be raised. However, an experienced
self defense attorney can guide you through each of these processes and help maximize your
chances of avoid criminal charges or prison, if criminal charges are filed:

However, if the prosecutor at the conclusion of law enforcement’s investigation determines that
your use of deadly force was not justified, you will be arrested and charged with a homicide
crime, such as manslaughter or murder.

If prosecutors determine that your use of deadly force was not justified, then you will be
prosecuted for a homicide crime. Your self-defense attorney will gather all of the evidence and a the appropriate time will file a motion to dismiss or a motion to quash for insufficient evidence to support the charge of murder or manslaughter.

The judge will conduct a hearing and consider witness statements and argument by your
Oklahoma criminal defense attorney and decide whether you are immune from prosecution based
on your justifiable use of deadly force. The judge will dismiss your murder or manslaughter
charges, if the court rules you were justified in your use of deadly force. Alternatively, if the Court believes the question is too close to call or believes it remains a question of fact for a jury to decide, then the judge will deny the motion to dismiss and your case will proceed to jury trial on your manslaughter or murder charges.

3. Facts applied to Law: Jury of your Peers

The final and most important analysis of your use of deadly force and whether or not it was
justified is at jury trial. You can and should raise the affirmative defense of justifiable use of deadly force or self-defense, if the police, prosecutor, and judge determine you do not have
immunity from prosecution.

Having an experienced trial attorney that has successfully tried murder cases in the past is crucial to help build your defense and fight for you at trial on your manslaughter or murder case. In trial, your chosen self-defense attorney will use their experienced trying murder cases and asserting the affirmative defense of self-defense to try and convince the jury that you used justifiable deadly force in your case. The jury must find that you are guilty beyond a reasonable doubt, after consideration of the affirmative defense of self-defense before you can be found guilty and sentenced on your charges. You will be found not guilty, if the jury is not convinced beyond a reasonable doubt.

Experience matters when you have to prove you were justified in using deadly force defending your home during a home invasion in Oklahoma. It is important to know the Oklahoma defense lawyer you hire is dedicated to your cause and versed in all aspects of self defense and criminal defense in Oklahoma.
Cannon & Associates is dedicated to Fierce Advocacy and will fight for you and your rights in court. Cannon & Associates is here to support and guide you through all of your options and will be there for you from beginning to end. Contact Cannon & Associates to protect your rights and fight for your case in Oklahoma. Complete the CONTACT FORM ON THIS PAGE NOW or CALL at 405-657-2323 for a free confidential case evaluation.