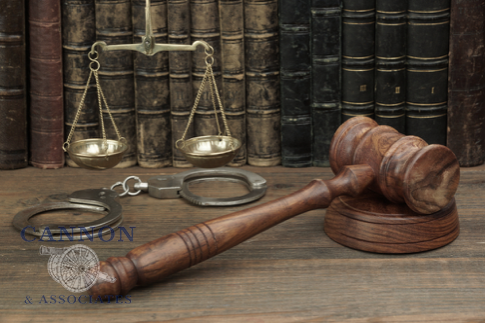 STATUTES AND GUIDELINES FOR FEDERAL CRIMES

What are Sentencing Guidelines for Federal Crimes?

What are the Types of Federal Criminal Sentencing Guidelines?

Below is a federal sentencing table used by judges to determine the maximum and minimum sentences. 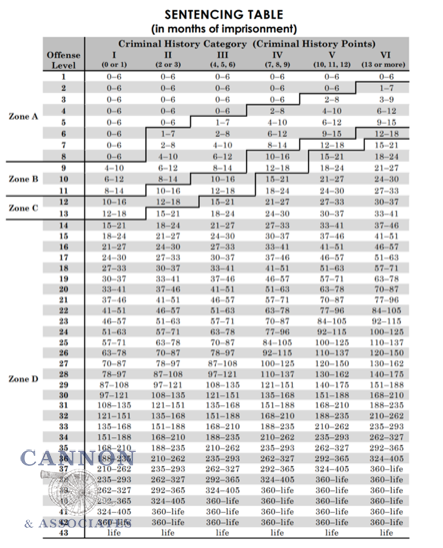 What the Federal Sentencing Guidelines for my Federal Drug Trafficking Offense?

Having an experienced federal criminal defense lawyer is important when facing federal drug trafficking charges. For certain federal drug convictions, judges are required to impose minimum criminal sentences. A federal judge who sentences a person who trafficked the following amount of illegal substances under a drug trafficking charge must give that defendant at least 10 years of prison time:

Further, if a judge sentences a person of trafficking the following list of illegal substances, the minimum sentence a judge can impose is 5 years, and the maximum is 40 years in prison:

These minimum sentences can be extended to 10 years if the defendant is a repeat offender or 20 years in federal prison, if as a result of the federal drug trafficking charges a person lost their life or serious injury results from the crime. If the defendant is both a repeat offender and has suffered death or serious injury, the minimum sentence is life in prison.

Another important consideration in deciding to enter a plea in a federal criminal case or go to trial is the charges that you are facing in your federal criminal case. In many federal criminal cases by agreeing to enter a plea of guilty you will avoid prosecutor for additional charges or an agreement can be reached for dismissal of some of the charges you are facing, i.e. avoid a superseding indictment with additional felony charges. Federal prosecutors are motivated to resolve cases by plea agreement for the protection of law enforcement resources, to avoid subjecting a victim to a lengthy and uncertain jury trial, and the prosecutor will have more time for other work by avoiding lengthy trial preparation.

What are Federal Plea Agreements?

Plea agreements are a very common means for defendants to avoid the time and potential exposure of going to trail on a federal criminal case. Your federal criminal defense attorney will seek to obtain the best terms possible for your plea agreement, if you want to enter a guilty plea in federal court. Under federal plea agreements, a defendant can agree to plea in three ways: guilty, not guilty, and nolo contendere (no contest).

Yes, in some cases additional restrictions apply in plea bargain cases in federal court. Federal prosecutors cannot negotiate plea agreements that change civil liabilities for the defendant. Plea bargains in federal court may not impact national security, without involvement of the federal law enforcement agency involved or appropriate government agencies consent. Pleas of no contests are rarely granted by federal judges as policy states those that choose to maintain their innocence in federal court should take their case to jury trial.

Once you and your federal criminal defense attorney have reached the decision to enter a plea in your federal criminal case you will be required to appear before the court and make a proffer. The federal judge over your case will place you under oath to tell the truth and will ask you questions in open court to ensure you are making a knowing and voluntary decision.

The federal judge in your case will advise you that upon acceptance of your guilty plea, you will have waived and forfeited those rights. At that point, the court will advise you of each charge you are facing, the possible punishment, and other collateral consequences in your case, such as forfeiture of assets or deportation, if applicable. Upon deciding that your plea is voluntary and knowingly entered, the court will accept or reject your plea and upon acceptance a sentencing date will be set in your case.

A sentencing judge can consider a broad range of information about a federal defendant in order to give the most appropriate and fair sentence. At sentencing, there is a lower bar for what information will be included and what the judge may consider. This means that a judge may not have permitted evidence of prior convictions, or even acquittals, during trial, but will allow them during sentencing. The purpose of this is to give the judge the most complete picture of the defendant. Prior convictions can be aggravating evidence which the federal judge uses to enhance a convicted defendant’s sentence. The criminal history determination has a major impact in sentencing a federal criminal defendant.

Refusal to Cooperate with Authorities

If a defendant was charged under extensively and materially misleading information, which the judge then relies upon to expand the sentence against that defendant, then there may be a constitutional due process defense in the sentencing.

If evidence was obtained illegally, it may still make it in to sentencing. The judicial fear is that, by prohibiting this probative evidence about the defendant, the judge will impose a more lenient sentence than she would if the evidence had been allowed.

The most significant additional evidence which can be submitted for consideration during sentencing is victim-impact evidence. During sentencing, judges can allow victims to speak to the court about why they believe the defendant should, or in some cases should not, receive a harsher sentence.

Sentences Available to the Court

In the case at bar, would a probationary sentence be appropriate in lieu of incarceration. Additionally, would conditions of home confinement or electronic monitoring be sufficient to protect the public and deter the defendant from further criminal conduct.

The Sentencing Commission has multiple official policy statements, which may include recommendations to the Court concerning the handling of certain issues. These policy statements are specific to certain situations and may be beneficial in considering the appropriate sentence.

Founder John Cannon has been recognized as a Super Lawyer and Top 40 under 40 and knows what it takes to get you the outcome you deserve. Contact Cannon & Associates to protect your rights and fight for your case in Oklahoma. Complete the CONTACT FORM ON THIS PAGE NOW or CALL at 405-657-2323 for a free confidential case evaluation.