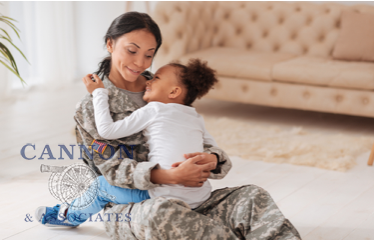 The Department of Defense treats legally separated military spouses as married to the military member for purposes of entitlement to military benefits. AFI 36-3036, Table 8.3 states the following in the joint regulation concerning legal separations in the military, Identification Cards For Members Of The Uniformed Services, Their Eligible Family Members, And Other Eligible Personnel, “A final divorce, dissolution, annulment, or death occurs. Exception: Do not terminate a spouse when an interlocutory divorce or legal separation occurs.” Further, a former spouse only includes a spouse that has gone through divorce, dissolution of marriage, or an annulment, i.e. legal separation does not make the list.

Therefore, legally-separated spouses are entitled to important resources provided to the servicemember, military ID card or CAC, base access, commissary benefits, and access to all other military benefits that are provided to a military spouse.

Historically, the multiplier for military retirement has been 2.5% multiplied by years of service. The easiest example includes 20 years of military service, which means 50% of high-three basic pay during retirement. This equation is the legacy retirement plan in the military. However, new members and members that members who selected the Blended Retirement plan, the multiplier is now 2% multiplied by years of service and the enhanced Thrift Savings Plan, which is now available.

The following are two important rules from the military and DFAS to consider in military divorce:

When a military service member dies, the Survivor Benefit Plan takes effect, which must be considered and protected by the former military spouse or these benefits can be lost as well.

The military Thrift Savings Plan or TSP has been around for a very long time. TSP is a defined contribution plan, similar to the civilian 401(k) plan that many businesses offer. The new Blended Retirement System provides matching funds from the military and partial replacement of the traditional military pension described in the previous section.

TSP is another valuable divisible asset in a military divorce. The former spouse is entitled to roll-over his or her share into a qualified account, such as a Roth IRA for tax and other benefits.

Servicemembers disability payments s from the Department of Veterans Affairs are not divisible marital assets. This is still the case, if the military service member waives some retirement in order to receive VA disability compensation. This action is commonly referred to a VA waiver. The non-servicemember spouse should protect their interested in the military divorce by requiring substitute compensation, if the service member elects to take this action. Failure to implement this protection will result in a reduction in the compensation to the non-service member in their military divorce.

Healthcare is another very important asset to consider in a military divorce. Tricare and the 20/20/20 rule provide some of the best healthcare coverage in our country at little to no cost, if you are eligible. Unfortunately, military medical benefits are not a divisible marital asset. Tricare and military medical benefits are created by right, if the former military spouse qualifies under the statutory requirements.

Military divorce court orders do not have an impact on the right to receive Tricare. In fact, a military divorce decree that denies the right to military medical benefits will typically not be honored by the Department of Defense, as it is an invalid order. The converse of this is true, if the divorce decree states a former military spouse is entitled to Tricare and they are not statutorily entitled, the federal government will deny military medical benefits, as an invalid court order.

20/20/15 Benefits Rule: This is the second-best circumstance for a former military spouse and healthcare coverage under Tricare. This rule applies when the parties were married for at least 20 years and the service member served in the military for at least 20 years; however, the overlap of marriage and military service is less than 20 years, but greater than 15 years. In this instance the former spouse is entitled to only one (1) year of transitional medical benefits under Tricare. I’ll say again with the 20/20/15 Benefit Rule, the former spouse is only entitled to one year of Tricare.

Continued Health Care Benefit Program: Upon military divorce, the former military spouse is entitled to the Continued Health Care Benefit Program (“CHCBP”), which is the Tricare equivalent of COBRA. This entitlement lasts three years. So long as the former military spouse remains unmarried and was awarded a portion of the military retirement or Survivor Benefit plan as part of the military divorce, the former spouse is entitled to remain on CHCBP for the rest of their life, so long as the former spouse remains unmarried.

Unfortunately, CHCBP is expensive. In 2019, the plan cost $1453 per quarter for an individual or $484 per month. Therefore, although this is a right worth considering, oftentimes there are less expensive health care coverage plans available in the private sector.

For more information on military health care benefits that are available to a former spouse after military divorce, please visit our page on Military Retirement in Divorce.

The Post 9/11 GI Bill is a very valuable military benefit. It can provide for the payment of tuition, monthly housing allowance, and a stipend for books. In fact in 2019, the Post 9/11 GI Bill provided roughly $160,000 in benefits for someone seeking a four-year college degree.

Additionally, this benefit is not only for the service member, but can be transferred to his or her spouse or children, so long as certain eligibility requirements are met. Going through a military divorce does not terminate access to these benefits. One’s status as a GI Bill beneficiary is transferable to a non-service member, so long as they meet the other criteria. Therefore, a former spouse may continue to receive Post 9/11 GI Bill benefits, so long as it is agreed to by the parties, preferably by an agreed Order in the Divorce Decree.

One benefit of providing GI Bill benefits to a former spouse is the possible impact on child support and spousal support. GI Bill benefits can be considered income for purposes of calculating spousal support and child support. The monthly stipend is considered income, for instance, which is valued at approximately $1,500 (dependent upon the location of the school attended, i.e. the cost of living there). However, book stipends and tuition assistance provided under the GI Bill cannot be calculated as income.

Military dependent child under the age of 10 years old are not issued military ID cards; however, in a military divorce there is an exception to this rule. AFI 36-3036, Para. 4-3, states that children of any age that do not live with the sponsor, i.e. military service member, will be issued a military ID card. In order to obtain an ID card for a child, you simply have to apply by completing and submitting a DD Form 1172-2.

Each branch of the military requires that military members pay a separated spouse a monthly sum to live on; however, a civilian family court order may remove or increase this requirement. In the Army, the amount due is equal to BAH-II or the national BAH prior to adjustment for specific duty station.

BAH payments cease upon divorce or a family law court order terminating this entitlement. Former military spouses are not entitled to BAH; however, during separation and the course of the divorce process, unless an existing court order states otherwise, the military service member is required to provided BAH to their spouse. Action can be taken through the service member’s chain of command to ensure these benefits are provided.

Do I Need a Military Divorce Attorney in Oklahoma?

Founder John Cannon is a field grade officer and Judge Advocate and Senior Associate, S. Douglas Elliott is a BG (ret.) Judge Advocate. Additionally, John has been recognized as a Super Lawyer and Top 40 under 40 and we knows what it takes to get you the outcome you deserve. Contact Cannon & Associates to protect your rights and fight for your interested in your military divorce. Complete the CONTACT FORM ON THIS PAGE NOW or CALL at 405-657-2323 for a free confidential case evaluation.